In the early years of any town, particularly any country town, the pub scene was one of great activity…a rough and rowdy scene of good humour. The scene in the Brunswick valley was no exception. The first Hotel in Brunswick Heads was the Ocean View Hotel, established by Mr. Bob Marshall in 1884. A cedar-cutter from around 1869, Bob Marshall was also the coxswain of the first Government rescue boat stationed at Brunswick Heads. His original establishment was not licensed to sell anything alcoholic, but was “well-stocked with necessities, including beverages”, as everybody about the place well knew.

Bob obtained his license in 1884, and was able, legally, to take turns with Mrs. Marshall to dispense “amber fluid ale and spiritous liquors”, some of it locally distilled. It was recorded in the Clarence-Richmond-Tweed Examiner, that the  Hotel was a “fine and commodious building, constructed of pit-sawn timber by local cedar-cutters, containing 14 rooms with first-class cuisine and splendid river views”. The opening took place with a Constable from the Tweed in attendance, in case of trouble. As was mentioned, elsewhere, however, his services were not needed.

For more than 20 years the Marshalls conducted their pub, which became well-known as the only establishment of the kind along the coast from the Richmond to the Tweed. Eventually the Marshalls disposed of the old Ocean View Hotel to the Curries, who also had a long-standing association with the pub trade. The old Mullumbimby Star recorded that under the direction of the Curries, the new Ocean View Hotel was completed in June 1909, by contractor James Laverty. The Hotel was erected at a cost equivalent today to $14,500, and was built in five months, owing to the prevailing dry weather. That building provided 9 bedrooms and a large sitting room on the ground floor, with 10 bedrooms upstairs, the large one above the sitting room designated as the Bridal Chamber. The old building was renovated and included a public bar, bar parlour and dining room.

In May, 1922, the Hotel was sold for 10,000 pounds to Mr. James Cavill, who had great plans for it. He determined to pull down almost all of the old building and erect a first-class residential and holiday Hotel, now justly famed for its architecture and brick-work. 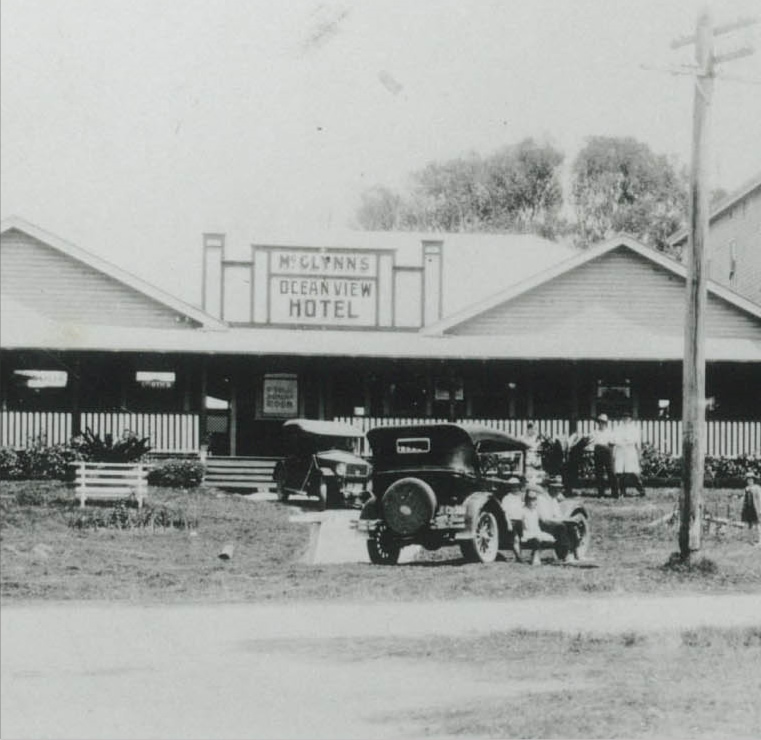 "immediately on entering the building, one is struck by the circular concrete stairway, which leads to the second floor. From the balcony, the foam-edged ocean and the green of the Brunswick River at high tide present a really delightful view. There is an up-to-date lounge with adequate accommodation for thirsty holiday-makers to drink and converse, a saloon bar, public bar, and spacious dining room. Expensive wine carpets have been used throughout the building, including 16 bedrooms, which have been neatly and artistically furnished in honey-coloured silky oak, and have hot and cold water on tap. The new blonde mountain-ash furnishings have been used upstairs.” These buildings are the fore-runners to the present, handsome Hotel Brunswick.
Mr Cavill later moved North to build another Hotel on what was to become Cavill Avenue in Surfers Paradise. The Hotel he left behind became a favourite for district honeymooners in the 1940’s.

The official opening of the Hotel was conducted by the President of the Byron Shire Council, Councillor James Bower. He congratulated the new owners, Mr. and Mrs. J D Carolan, and wished them well in their new surroundings. At that opening, a very old identity of Mullumbimby related the below story of the first Publican, Mr. Bob Marshall:
“It happened that in the 1880’s, a boat carrying a large cargo of wine, was ship-wrecked off New Brighton. Everyone, of course, went out to examine the wreckage, and incidentally, to taste the wine. But one taste led to another, and before long the villagers became raucously inebriated. There was one, however, amongst all this merry assemblage, who remained shrewdly sober, and quietly, but industriously, collected no small amount of the vintage and stored it in casks. Then, when his friends discovered to their great dismay that their supplies had been exhausted, the shrewd one produced the casks he had filled with such great foresight, and sold the wine to the villagers. Thus, quite by accident, or by shipwreck, the late Mr. Bob Marshall inspired to become a publican. His application in 1884 for a license to set up business as an innkeeper was granted.” 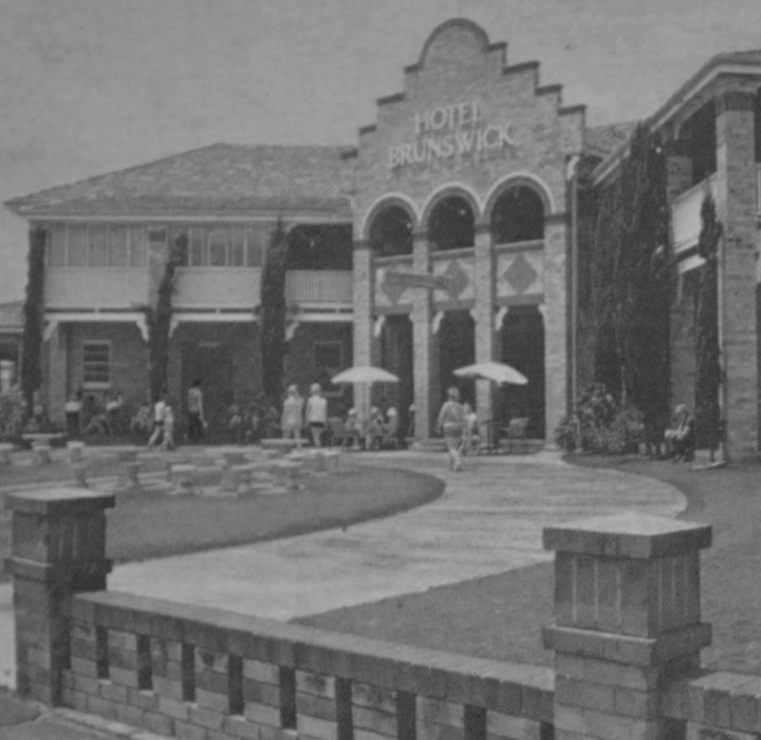 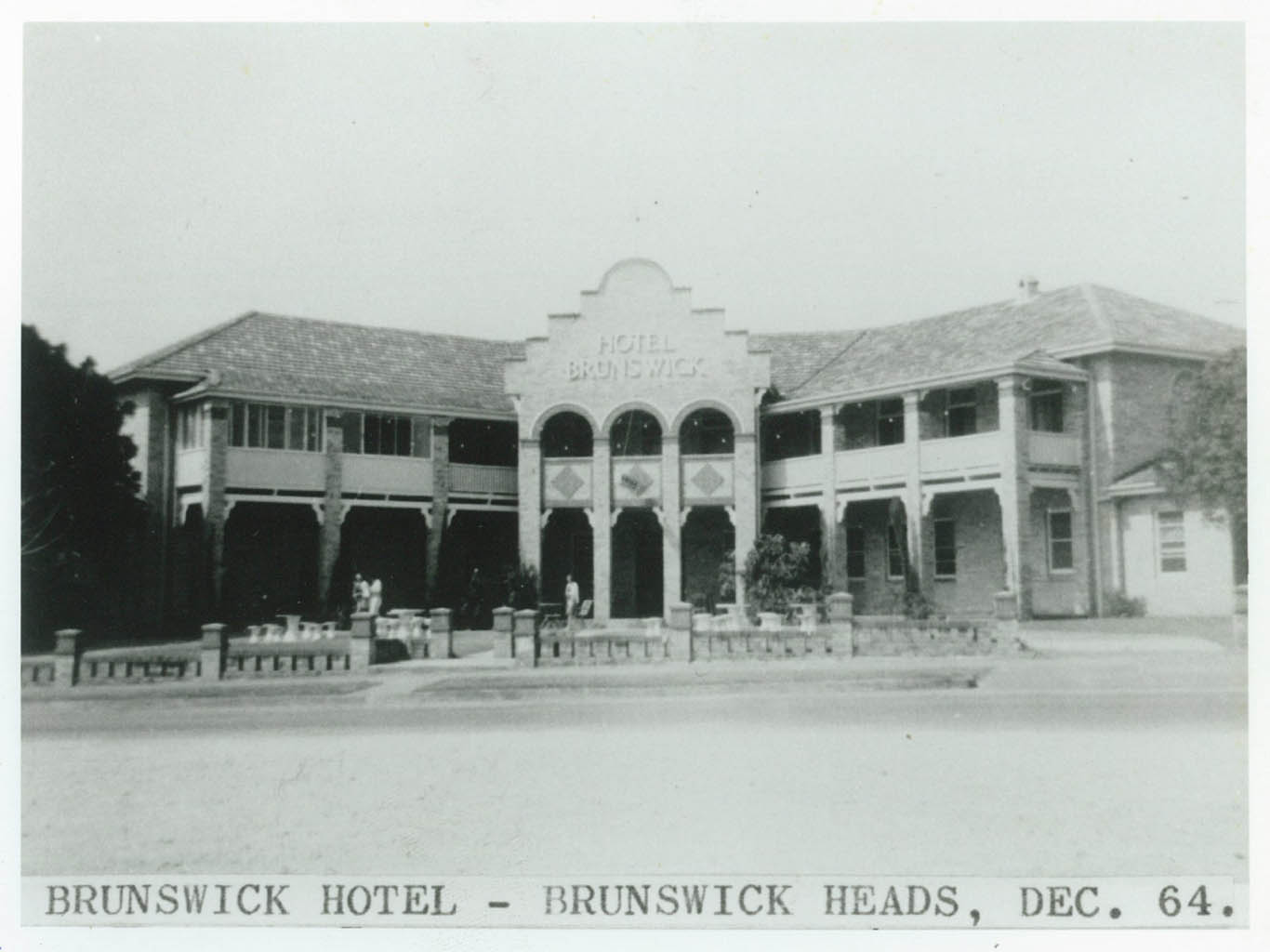 From the time of Mr. Cavill selling the Ocean View Hotel, the Hotel’s freehold was held by Tooheys Brewery, and subsequent operators were lease-holders only. These included Pam and Jimmy Richardson, Mr. and Mrs. Arthur Wykes (1977 – 1979), Peter and Julie Baines (1979 – 1986) and brothers Richard and Damian Sarks, whose cousin operated the nearby Kingscliff Hotel.
Since 1981 the Hotel Brunswick lease and freehold has been owned and operated by Delvene and John Cornell, who were also the developers, owners and operators of the Beach Hotel in Byron Bay from 1991 til 2007. Many improvements, extensions and additions have been made by Delvene and John to the Hotel Brunswick over that time, all designed to retain, as much as possible, the elegance and ambience of that by-gone era.
In January, 2011, the Daily Telegraph rated the Hotel Brunswick as the second-best pub beer-garden in Australia, with this report:
“Hotel Brunswick, 2 Mullumbimbi Street, Brunswick Heads -
Vibe: the caravan beer Crowd: Families and campers
The Hotel Brunswick is at the heart of this Northern NSW stop-over. The “Bruns”, with its North-facing courtyard beer-garden, shaded by giant Poinciana trees, has become a tourist attraction in its own right. Built in 1940 by Jim Cavill, the architect of early Surfers Paradise, the Bruns has established a reputation for top pub food and free, live entertainment. Bands play at the Bruns from Thursday til Sunday. If you can’t make it home after a big night, there is always inexpensive accommodation available upstairs in the colonial style rooms. The Bruns is ideal for families. Head along for a feed after taking the kids for a swim in the Brunswick River, a stone’s throw away. If you’re keen for a surf, the waves are a stroll, then off to the pub for the afternoon.”
Today the Hotel Brunswick is renowned for tasty, traditional pub food, a shady beer-garden, and the vintage atmosphere of its classic, 1940’s Australian architecture. 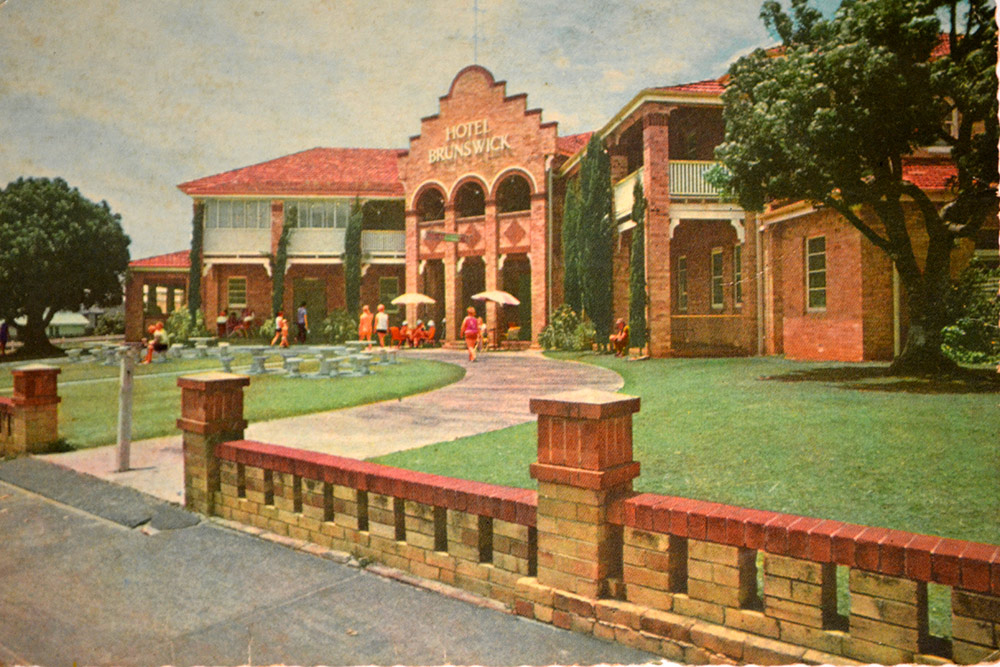